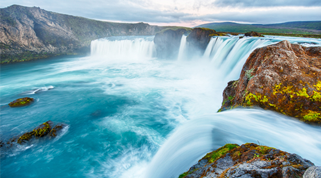 Iceland is located midway between Europe and North America. It is an island in the northern part of the Atlantic Ocean and is 103,000 sq km (40,000 sq mi), making Iceland roughly the size of the state of Kentucky in the USA. This nation of around 320,000 people has seen rapid economic development since it gained independence from Denmark in 1944. Modern communication links have enabled the development of a sophisticated state-of-the-art infrastructure.


On 2010 The Icelandic Parliament unanimously passed a proposal to make the country a "new media haven". The proposal, entitled the "Icelandic Modern Media Initiative", resolves to task the government with finding ways to strengthen freedoms of expression and information freedom in Iceland, as well as providing strong protections for sources and whistleblowers.


Facts you didn't know about Iceland